It's been quite a while since my last post as I suspected it would be, things have been moving slowly but steadily towards getting the core playable features of Doc complete. Today's blog is going to be about the way Doc Cosmos 2 is played, the design choices that have gone (or will go) into it and the reasoning behind them. So lets start with the core mechanics.

As with the first game the sequel sees Doc trying to reach a goal by means of finding and using coloured keys to open coloured doors scattered across the level. Unlike the first game however Doc will have weapons to help him confront the numerous enemies that get in his way, and so the first task was to work out how to balance the game (create a game where each timeline is equally important) to work with weapons, a rifle in the new timeline and a sword in the old timeline: 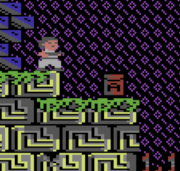 The plan has always been to make Doc 2 a much bigger game than the original, without the limitations of a 16Kb cartridge I am free to create a multiloading expansive game with several different unique locations:

In the first game Doc progressed through a single world with one goal in mind, escaping with the time device. In the sequel I wanted to create something that players could go back to and improve on. So a scoring system has been added that will allow players to try and better their high scores and collectables have been added to allow completionist players to reach 100%: 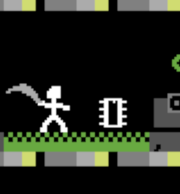 One of many tech pieces scattered through the levels

In addition to the weapons that Doc now has at his disposal, I wanted another way to make Doc 2 feel unique and give the player something extra to think about while playing. At the same time I did not want to create something that did not fit in with the games theme of time travel and so I came up with the concept of freeze and rewind for Docs device:

I hope this gives an insight into the decisions that have been made for Doc 2 and the way it will feel to play. The majority of this functionality is in place now but I want to tweak and refine it over the coming months as I finish the rest of the game design. I'll be trying to finish the core code for the exploration levels this month and ironing out any bugs I can find with a view to moving onto the special world 3 level that shall remain secret for now. Who knows maybe next dev log I'll have something to reveal. Until then, cheerio!

The sword could be used to block bullets... Ala Ninja Spirit! :kreygasm